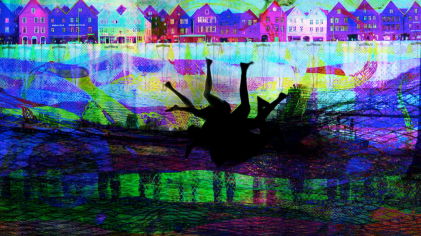 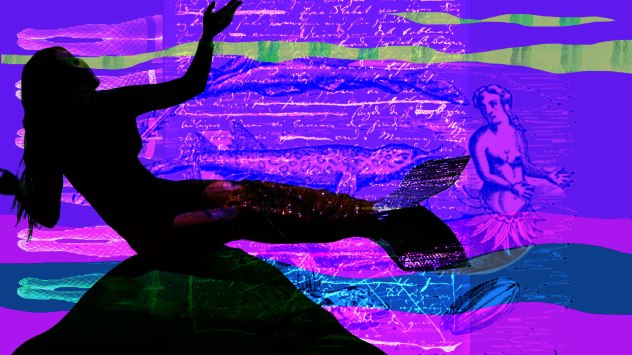 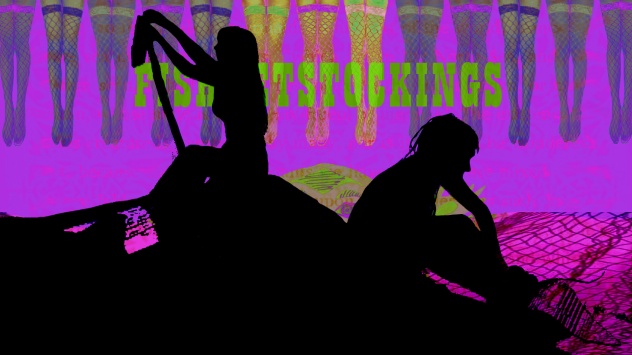 FISHNETSTOCKINGS is an interactive installation created by Joellyn Rock, computer scientist Pete Willemsen, visual artist Alison Aune, and a crew of collaborators. In FISHNETSTOCKINGS, digital projections include a mashup of historical references, folk patterns, and story fragments fished from the project twitter feed. The audience has multiple modes for participation. Using the project Twitter hashtags (#fishnet1, #fishnet2, #fishnet3) you may add text to the 3 parts of the story arc and watch your words flow through the video projections. By entering the projections and moving your own body inside the colorful underwater world, you may interact with mermaids, ships, and hybrid sea creatures swimming through the narrative.

FISHNETSTOCKINGS is inspired and informed by historical mermaid legends and their myriad literary variants. Both cautionary and emboldening, mermaid tales inhabit the blurred boundary between childhood longing and adulthood regret. In variants of the little mermaid tale, we find a story of the passage between worlds. Den Lille Havfrue, Hans Christian Andersen’s sacrificial rite-of-passage story sings out for alternative endings. Across the globe, one discovers mermaid tales clinging like barnacles onto historic seaports, sharing themes of the cross-cultural outsider, human trafficking, economic injustice, environmental imbalance, and gender inequality.

FISHNET Act I : Innocence & Curiosity  This is one of several videos created for the tale’s beginning, when little mermaid is living with her family in her underwater palace, longing for a view of the upperworld.

Act II : Stormy Seas, Shipwreck & Rescue   In the installation, the audience could tweet with #fishnet2 to make words flow through the videos for part 2, when the mermaid encounters the prince on his ship, their worlds collide and a stormy shipwreck leads to a rescue.

Act III : Bad Bargains & Good Exchange Rates  Use #fishnet3 to add text to the third part of the story, when the mermaid sacrifices her tail, loses her voice, and reinvents herself in the fishmarket. It’s your turn to voice alternative endings to the bad bargains made by little mermaids.

FISHNETSTOCKINGS was exhibited at Lydgalleriet in Bergen, Norway during ELO 2015 : The End(s) of Electronic Literature (August 4-8, 2015). The Hybridity and Synesthesia exhibit showcased multimedia artworks that push at the edges of literary art and engage the viewer with emerging interactive technologies. Live DJ mix at the Lydgalleriet opening was provided by Simon Optiz. FISHNETSTOCKINGS was created with the help of the Motion and Media Across Disciplines Lab (MMADLab) at University of Minnesota Duluth.